Nearly eight months after Ohio recorded its first COVID-19 case, the global pandemic continues to disrupt the health and social services system. Community Solutions surveyed agencies from across Ohio to collect real-time information on what service providers are seeing and how they are adapting. Our first survey results were collected in April 2020, during a time when the most restrictive Stay-at-Home Order was in place. The second round was from September 2020, when daily reported cases were much lower, some schools had resumed in-person instruction, and many nonprofits and businesses had reopened. 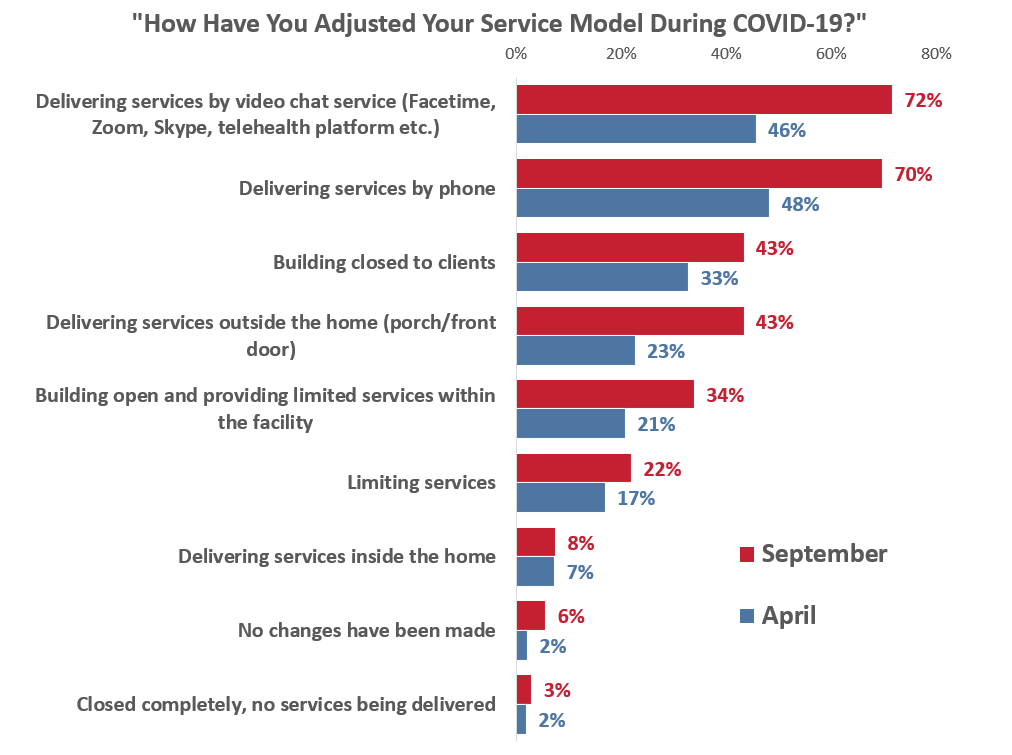 To date, the largest impacts have been an increase in the demand for services across the board and a decrease in volunteer availability

In our second survey in September, more than 80 percent of respondents indicated that COVID-19 caused at least some disruption to their agencies, but half said that the disruption was manageable. It is clear that some agencies have settled into a new normal, with the number saying that COVID-19 caused minimal disruption growing from 4 percent in April to 13 percent in September. We also saw a corresponding drop in those reporting significant disruption, which fell from 53 percent to 43 percent. To date, the largest impacts have been an increase in the demand for services across the board and a decrease in volunteer availability for agencies that rely on volunteers. In fact, more than half of respondents said the demand for services has increased, or they expect an increase in demand. Respondents were split on COVID-19’s impact on their ability to provide services; while 38 percent said they expected or experienced a decreased ability to provide services, 27 percent said they expected or experienced an increase, and 35 percent indicated there had been no change.

…basic needs are a serious problem for many in communities across Ohio…we are increasingly concerned that families are simply not able to make ends meet. It appears that delivering services remotely via video conference or telephone has become even more common since April, and fewer agencies are limiting services. Unlike in April, most agencies now report that they have enough cloth masks for their staff and volunteers, but medical grade Personal Protective Equipment (PPE) remained an issue for more than half of respondents. Respondents also reported in this latest survey that employees have access to paid sick leave and mental health, but fewer are able to offer the ability to work from home or flexible hours.

Unlike in April, most agencies now report that they have enough cloth masks for their staff and volunteers, but medical grade Personal Protective Equipment remained an issue for more than half of respondents

This survey shows that basic needs are a serious problem for many in communities across Ohio. Four out of five respondents indicated their clients struggled with at least one necessity, such as food, housing, child care, transportation or internet access. Data from the U.S. Census Bureau showed that most Ohioans used their spring stimulus checks to pay for basic needs. With tens of thousands of Ohioans still out of work and no additional assistance coming from the federal government, we are increasingly concerned that families are simply not able to make ends meet. The COVID-19 pandemic has already affected health, economic and social conditions as well as the agencies and organizations that seek to address those issues. While the overall levels of disruption are somewhat less than what was reported in April, service providers continue to adapt to current realities. Community Solutions will continue to collect, analyze and update data about the impact of the pandemic.

The online survey was conducted by The Center for Community Solutions during September, 2020. Respondents include direct service workers such as case managers and frontline workers and from program managers, administrators, support staff, and executive directors. These individuals work at agencies that range from fewer than 10 employees to more than 500 that serve 39 of Ohio’s 88 counties. About 40 percent of respondents in September said they completed The Center for Community Solutions’ survey in April.